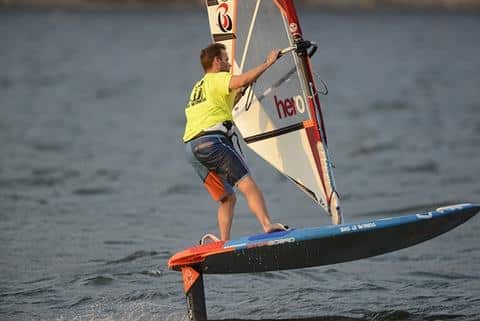 Is wind foiling a fad? Is it dangerous? Will any board or sail do? What’s the difference between wind foil masts, wings and fuselages? Get answers from Big Winds’ Eddy Patricelli. When he wasn’t foiling last summer, he was answering questions about foiling. Lots of ’em. Here are the 12 that he heard the most, along with answers (and videos) to get everyone riding high.

The sensations. Flying high, sweet silence – wind foiling is as surreal as one imagines, and better. Once the basics are mastered, it’s less physically taxing than traditional windsurfing, but just as challenging and inspiring. Insane efficiency, stealthy speeds, absurd upwind/downwind angles — wind foiling is not a novelty. It’s here. It’s growing. It delivers!

The challenge. Wind foiling is best tackled in the 8-15 mph winds that have tormented experienced windsurfers for decades. And better, wind foiling rarely requires sails larger than 7.0 meters. That means less gear, and a fresh experience in wind conditions most waterways experience most of the time. Win. Win. Win.

The water time. Armed with a wind foil, windsurfing sessions snowball. Why? Riders feel un-skunkable. Wind foiling is the ultimate light-wind contingency. It all but guarantees that when you head to the water, you get wet — no matter what the wind serves up.

2. How Hard is Wind Foiling to Learn?

The short answer: not very hard. Most riders comfortable using foot straps on traditional windsurfers are up and foiling in a straight line within a few sessions.

The smart answer: The right gear helps. Our Big Winds’ staff started wind foiling before foiling-specific boards existed. Back then, we were cautious about who we allowed try foiling. Why? See next question.

Safe Flying: Foil-specific boards like the JP Hydrofoil 135, Naish Hover 122, Slingshot Dialer 145, and Starboard Foil 147 minimize peril. Their bows are designed to skip off the water during nose dives to prevent catapults. So much so, the arrival of these boards prompted Big Winds to rent out wind foils without worry. Foiling-specific boards also feature inset foot strap positions that offer a well-balanced stance that fast tracks progression.

4. What’s the ideal board for learning to wind foil?

Generally, a board that offers …

– at least 70 centimeters of width

– a bow designed to skip off the water

– a foil-reinforced fin box or other mounting system

5. Will my old light-wind board work for wind foiling? Yes, though caveats exist. Namely, a slow, more perilous learning curve (see question #3), and the chance of damaging your board’s fin box. That said, fin box adapter plates, as well foils from LP, Naish, and Slingshot that utilize flanges to disperse foiling loads help minimize the chance of fin box damage.

6. Some foils have short masts, others long. What’s the difference?

Generally, wind foils with short masts are best for …

Generally, foils with long masts are best for …

7. What’s the difference between aluminum and carbon wind foils? Aluminum foils sacrifice stiffness and longevity when compared to their carbon counterparts. They’re also heavier, which riders feel most while carrying their foil gear to and from the water. Most aluminum foil makers recommend spraying their screws with anti-seize compounds to minimize corrosion, especially when foiling in salt water locations. Carbon foils require less maintenance, are easier to carry, and offer lasting stiffness.

8. What’s the performance difference between wings of various sizes? Generally, large wings are best for first-time foilers. They rise in low winds, and at relatively slow board speeds ideal for progression. Small wings are typically best for experienced foilers. They require more wind and/or board speed to rise, but offer higher top speeds. Find more on wings, and mast and fuselage performance differences in this video showdown.

9. Do normal windsurfing sails work for wind foiling? Any tuning tips? Yes, normal sails will do the job, and often work best for foiling when rigged at minimum downhaul and outhaul settings. Foiling-specific sails like the Naish Lift and Sailworks Flyer, however, accelerate progression in big ways. Find more on the Flyer, as well as tuning tips for traditional windsurfing sails, in this video.

10. What size sail should I rig to go wind foiling? Typically, rig 1.5 – 2.0 meters smaller than for regular windsurfing. Rig to uphaul (read: not waterstart). If you can waterstart comfortably, you will be overpowered when riding high.

11. How do you carry a foil board and rig to the water together? Easier to show than tell. See photo.

12. So how do you ride high when wind foiling? Any tricks?

You gotta flap to fly. Often, your best first foiling runs entail some pumping with the arms and legs to rise (and ride) in a controlled manner. By contrast, sitting back and waiting for a big gust to drag you up onto the foil (sans pumping) often entails lots of waiting and – if a big gust does arrive – a wild, overpowered, rodeo ride. Be proactive. It just takes 6-8 mph of board speed for the foil to lift the board. Once up, the board flies free, making long flights in ridiculously light winds possible. A few pumps can be the critical difference that makes those first long flights possible.

Less is more. As the board rises, so does its sensitivity to your body weight and sail trim. Sudden movements are your enemy. Subtle body weight shifts (forward to level off, back to rise), and subtle, finger tip sail trim adjustments go far in building rider confidence while flying.

Bonus Q: How the heck do I turn around when learning to wind foil? Prep early, well before a shallow shoreline (foils run deep!). Sheet out to slow down and drop down, off of the foil. Your board is enormously stable in the water with a wind foil attached to it, perfect for slow speed tacks or pivot jibes. As for jibing at high speeds riding high, that’s a subject we’ll tackle next!

Eddy Patricelli was the editor of WindSurfing magazine from 2001-2007. He has been sailing the Gorge for 20 years. See his best video tip for getting your kid hooked on windsurfing here.

How to Rig in 90 Seconds (Cheater’s Edition)

Rigging fast can be easy, and foolproof with the Duotone Power XT 2.0 extension. Easy threading, effortless downhauling, and on-the-water tuning — here’s how this unique extension delivers.

END_OF_DOCUMENT_TOKEN_TO_BE_REPLACED

A vent screw carries big, board-damaging perils. That is, unless you know how to use it properly. Eddy shares the goods, and a nifty trick to never forgetting about it.

END_OF_DOCUMENT_TOKEN_TO_BE_REPLACED

What to do when you rig a windsurfing sail to its specs, and it still looks wrong? Here’s help.

END_OF_DOCUMENT_TOKEN_TO_BE_REPLACED

The Goya Fringe is not a jack of all trades master of none. Here’s video proof that includes epic Baja footage, as well as insight from Goya sail designer Jason Diffin. It’s time to rig small, pack less and drop wind minimums. One sail to rule them all!

END_OF_DOCUMENT_TOKEN_TO_BE_REPLACED

10 Do’s and Don’ts: Getting Into a Wesuits

There is a right way to get into a wetsuit. These 10 Do’s and Don’ts for front and back zip wetsuits save time, energy, and save your suit..

END_OF_DOCUMENT_TOKEN_TO_BE_REPLACED

For a tiny part, a windsurfing mast base carries lots of questions. 1-Bolt or two? Tendon, rubber or mechanical joint? Euro-Pin or U.S. Cup? This guide offers answers. Find side-by-side comparisons of each windsurfing base system — their pros, cons, and who benefits most from each.

END_OF_DOCUMENT_TOKEN_TO_BE_REPLACED

p Bye bye North. Hello Duotone ... But not so fast. The name change has left Big Winds with loads of North gear, and North nostalgia....

END_OF_DOCUMENT_TOKEN_TO_BE_REPLACED

Cart has been replaced

Login first to save cart

Your email has been sent!