Freestyle speed and pop at its best. For the expert rider, or those who crave early planing in a compact shape, the Air Pro delivers.

The 2021 Goya Air Pro is a bit narrower and slightly smaller, offering more control in stronger wind and faster spins in the air, meaning its new shape is more radical than the last generation. Further, we added a smaller volume to the range for super strong wind, smaller people and kids.

The Air Pro in full production spec followed team rider Antoine Albert all over the world, from Fuerteventura to Bonaire and New-Caledonia.

Jay Lee: “We tested a load of prototype boards along with their competition over the year and are finally able to introduce what we perceive to be the new fastest freestyle board on the market. The Air Pro offers incredible acceleration, super fast reactive rotations and instant planing.

The new, thick square tail design is a blessing, it gives you more grip and confidence to enter your moves faster, its release and pop send you flying higher, and it provides a wonderful forgiveness in sliding maneuvers.

The Air Pro comes with an all new MFC GE Freestyle fin that works seamlessly with this new boards.”

Available with a US finbox.

Biaxial Carbon & Unidirectional Carbon. Extensive patches of biaxial carbon connect the peak loads of your feet to the rest of the deck, distributing the forces resulting from jumping and waveriding evenly. Additionally, a long and wide deck carbon patch acts as a superior backbone, making you board stiffer and eliminating distortions.

Full S-Glass Hull. S-Glass covers the board 360°. S-Glass provides higher strength and elasticity compared to standard glass, while maintaining more flex than Carbon. Flex is a super important secret to an outstanding Wave board. A full Carbon Wave board would be too stiff to deliver the agility required by radical modern wavesailing. We use a highest quality full S-Glass hull in combination with a highest quality Carbon stance monocoque and core axis reinforcement to meticulously control the flex in our boards. Controlling this flex is a key to what makes Goya Pro Wave boards special and inimitable. 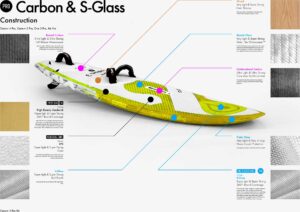 What Ships For a Fixed Fee?

What Ships by Quote?

Contact us! We’ll use our thirty years of shipping experience to secure the lowest quote possible. To receive a quote, tell us what you are ordering and provide a complete address. For international orders you are responsible for import duties and taxes.

When do you refuse it?

And how can you protect yourself?

Get answers to common shipping questions.

Why is there no tracking info for my order on the shipper’s web page? (0:25 in video)

It can take up to 48 hours for tracking info to display from when you receive our shipping confirmation email. Rest assured, your package is en route. Also, be sure to enter the BOL # (Bill of Lading) with no spaces in the tracking field.

How will I know which freight facility my board is being delivered to? (1:05 in video)

How will I know when my board is ready for pickup at a freight facility? (1:55)

The freight facility will contact you when your board is ready for pickup. Be sure to bring a photo ID, and be sure to check the facility’s pickup hours.

An employee at the freight facility is demanding I sign for my board shipment prior to me seeing it. What do I do? (2:30)

Sign your name followed by “on further inspection.” Signing in this manner offers protection. It gives us a 48 hour window for damage claims to be made with freight providers.

My board is being delivered to my house. Its tracking info says it reached its destination, but I don’t have my board. What gives? (3:05)

You will receive a call to schedule delivery soon. The call occurs shortly after your board reaches the freight company’s destination hub. Note that board deliveries require a signature, which demand a drop off appointment. If the shipping company hasn't called to schedule a delivery time, there's no need to put your life on hold by waiting at home.

How can I protect myself (and my board) from freight damage? (3:50)

Inspect the box. Look for signs of trauma like tire tread, severe creasing, or puncture holes. If these are present, and reveal fatal damage to your board, do not sign. Refuse the shipment. Call us at 541 386 6086, and we will get a replacement board headed your way.

What if the box shows some wear, but it’s tough to tell if the board is damaged? (4:40)

Sign your name followed by “on further inspection.” Signing in this manner offers protection. It gives us a 48 hour window for damage claims to be made with freight providers.

Send us photos. Closeups of the damaged area, and photos that show the interior and exterior box damage go far. Also, keep the packing materials. We’ll work with our shipping partners to get you either a damage credit or a replacement board.

Fins, foot straps and hardware are typically hidden in protective cardboard sleeves. Closely examine your packing materials. Each board shipment entails a thorough checklist. Everything is in there!